The Hungry Tourist is delighted to present:

The Food Paradise of Dubai

❀    An opportunity to explore one of the world’s most unique culinary destinations.

❀    Savor in one city the grand cuisines of the Levant (Persian, Iraqi, Syria, Lebanese, Palestinian, Saudi, and Emirati)

❀    Experience the best of the ethnic cuisines that developed over the last 50 years in the UAE (Indian, Pakistani, Chinese,  Afghan, and Thai)

❀    Spend time in the intimate company of interesting and like-minded people from all over the world.

❀    A journey through hidden gems guided by the Hungry Tourist and his gang of local experts.

Probably not what you think

Many people have the pre-conception of Dubai as just host to second branches world’s glitziest and famous restaurants. Indeed, there are many of those in Dubai, but these are not why food lovers should travel to Dubai.

What makes Dubai so special is the plethora of ethnic restaurants of the highest possible level.

Think about it. 85% of Dubai’s population came from other countries, actually, from about every single country on earth. These people who came to improve their economic situation, made Dubai their home.

So the next logical step for them was to bring over from their home countries the most talented cooks and chefs so they can enjoy their financial success with “food from home”. That flow of talent and original raw materials over the last half-century resulted in the most varied, diverse, and authentic ethnic culinary landscape.

In fact, stringent quality control standards and the use of the best ingredients have resulted in many ex-pats saying that they prefer the food in Dubai to their home countries.

No other such place

Where else in the world can you enjoy Iraqi, Persian, Lebanese, Syrian, Emirati, Saudi, Indian, Pakistani, Sri Lankan, Chinese, and Afghani restaurants of the highest level on the same day?

Dubai is safe, open and the weather is perfect

Dubai is completely open (restaurants, shows, transportations, hotels, etc.) and the weather now is as close to perfect as possible.

the grand cuisines of the levant

The history of the Persians and Arabs is intertwined in culture, religion, trade, and of course – food, and dates back centuries.

Persian bakeries, restaurants, and cafés have dotted the Dubai skyline from when the city was a sleepy trading post to the international metropolis it has grown into today, serving succulent kababs, hearty stews, and an array of delectable rice dishes.

The grandest cuisine of the Levant.

Text will be updated soon.

There are literally a hundred or more mezze dishes each more delicious than the other. If you’re a vegan, Lebanese cuisine is ideal because there are so many salad and vegetable options to choose from.

If you’re not a vegan you can try their raw meats and raw kibbeh which is delicious. Lebanese cuisine is levant cuisine done to perfection. Let’s not forget they make a mean hummus!

Iraqi cuisine is one of the most ancients in the world, if not the most. Actually, recipes found on Mesopotamian tablets are considered the first cookbooks in history.

Today, the cuisine of Iraq reflects this rich foundation as well as influences from the culinary traditions of neighboring Persia, Turkey, and the Syria region area.

The meal is always a sharing meal and begins with appetizers and salads, then a vast variety of stews, soups with or without Kubbah/Kibbeh (minced meat ground with bulghur, semolina, wheat or rice, stuffed with more spiced meat). Stuffed vegetable dishes such as Mehasha (Dolma) are also popular.

The most famous dish today is without a doubt the Masgûf (fatty river fish spiced with curry powder, pepper, and tamarind then grilled upright in front of a bonfire.

Indian cuisine is as diverse as the country itself and has been well represented in Dubai through decades of Indian settlements, starting with those who arrived by ship in the 1970s.

From street style chaat food to modern fine dining and everything in between, there are over 2000 restaurants serving food from all parts of/ NSEW India.

For never has one city seen such a vibrant mix of all ethnicities, not only from India but nationalities from all around the world, bringing their food and culture to this melting pot.

Seafood has been the mainstay of the Emirati diet for centuries. The United Arab Emirates cuisine is a reflection of a great Arabian heritage and vast exposure to civilizations over time.

Meat, fish, and rice are the staple foods of the Emirati cuisine. Lamb and mutton are the more favored meats, than goat, beef, and Camel meat.

Usually, Dates are consumed with meals. Popular beverages are coffee and tea, which can be supplemented with cardamom, saffron, or mint to give it a distinct flavor.

The Rest  of Paradise

Dubai boasts a multitude of cultures from around the world and many from Asia. The city has authentic Chinese, Pakistani, Thai, Afghani, Sri Lankan, Malay, Indonesian restaurants along with many other small pockets of gems from the rest of Asia.

You can also find everything from British roasts to Japanese ramen, with a mix of locally sourced and internationally exported ingredients.

The City of Gold is the City of Food, with street food to casual eateries and high end fine dining options, something to suit every kind of diner.

The multi-course tasting menus are at par with global dine dining, and the ambiance and vibes are unique to the city.

The gems lie in the street eats from all parts of the world, whether it’s hummus and shawarma from Lebanon, chaat from India, or noodles from Thailand.

In my humble opinion, the best fine dining experience in Dubai.

Tresind Studio was created by Chef Himanshu Saini and his team with the aim of showcasing Modernist Indian cuisine in an intimate setting. The studio brings together seasonal menus, elevated techniques, and world-class service to provide a fine dining experience in Dubai like no other, for just 20 guests per seating.

It is virtually impossible for one person to intimately know everything Dubai offers. The selection is just too vast and deep.

Therefore, I feel so fortunate and privileged for my ring of local expert foodies friends who came from Syria, Lebanon, Saudi Arabia, Iran, India, Sri Lanka, and Thailand, and have lived in Dubai for at least 10 years.

These friends’ contribution to planning your tour has been immense, and some of them will also accompany us to their culinary gems.

Mandarin Oriental Jumeira, Dubai is the newest 5 stars deluxe hotel in Dubai. Overlooking both the pristine waters of the Arabian Gulf and Dubai’s glittering skyline, the hotel is a stunning destination with an enviable beach setting.

With its inviting interiors and unmatched levels of service, the resort brings a new wave of luxury to the shores of Dubai.

Price does not include airfare and any travel or medical insurance.

Extra nights: in Mandarin oriental Hotel before or after the tour can be booked in advance at special rates.

Apply to Join The Tour

A Note on Set Menus

The menus offered during the tour are selected by The Hungry Tourist with the help of our local partners. We believe they represent the best culinary fare Dubai has to offer. Guests may order outside of these menus at their own expense.

A non-refundable deposit of USD 1000 per person will be charged upon reservation.

The balance will be charged to your credit card 60 days prior to the first day of the tour.

If cancellation is received up to 30 days before the first day of the tour, the deposit will be forfeited.

I feel so honored to have been part of this amazing food trip with my good friend David Califa & his friends! Not only has he given me the window of endless opportunity to really see what the culinary world has to offer, but these incredible group of people who also share the same passion and knowledge of food!

I would like to say that all the places we visited have been exceptional and unique in its own character. There are no words to describe the experience other than “AMAZING”… It is so true that when you eat and share your memorable food trips, the food tastes so much better when it’s shared, and this trip sums up every single bite we all had! Thank you again, David! Looking forward to hearing more about your adventures! 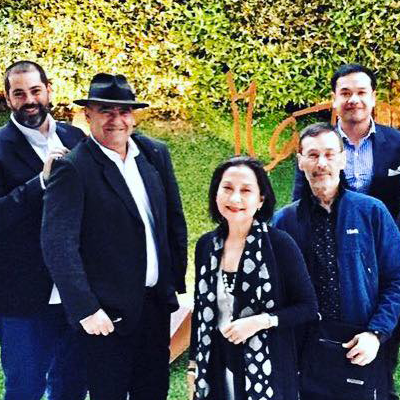 This trip to San Sebastian was my fourth trip with Dudi Califa and each time I say that the trip I am on is the best. So I have come to the conclusion that they are ALL outstanding as long as he leads them!

The restaurants he chose are the best in the world, the quality of the guides he chooses cannot be matched. The gourmet food I have had on all his trips is unmatched to anything I have ever had. His generous spirit allows you to have your culinary and wine dreams come true. I am booking all his trips and shall repeat the same ones every time.
It’s a dream come true each and every trip.

Sensual, exciting, amazingly tasty.
Great group of foodies with a common passion and a lot of respect for people in general and the group members in particular. Friends who become happy when they meet fresh ingredients, perfect technique and extraordinary creativity on a plate. 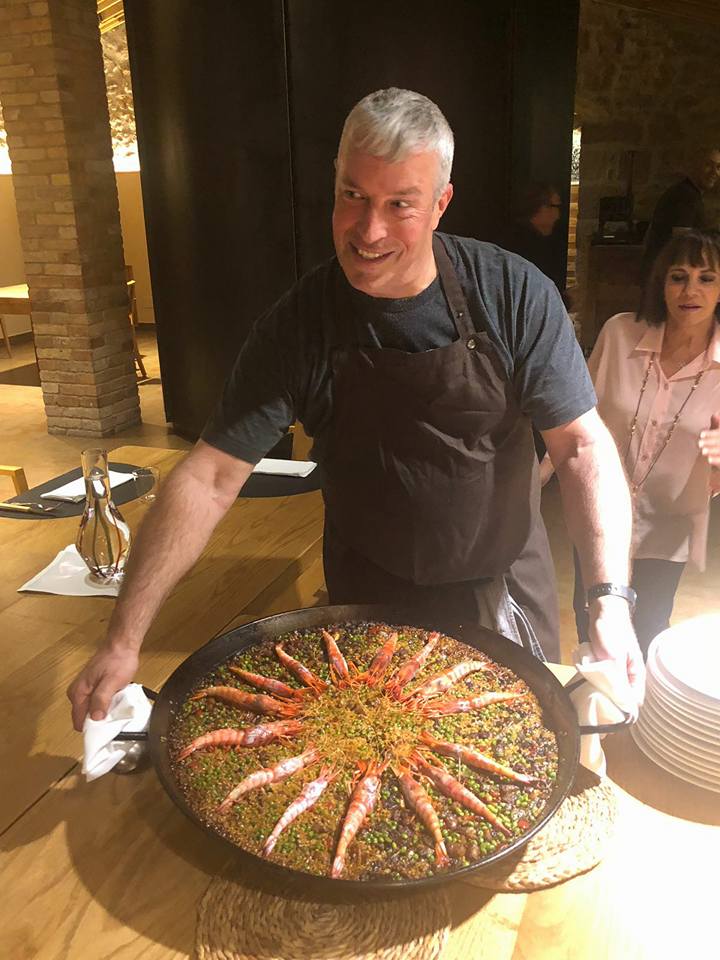